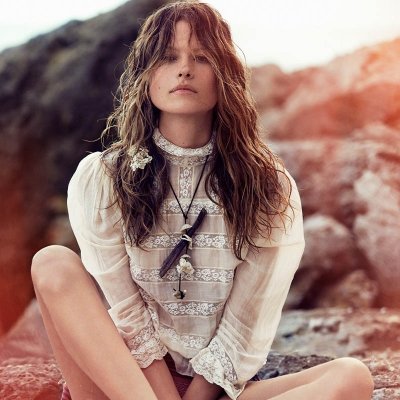 1. The USA Has the Largest Population of Redheaded People

This is one of the most surprising and fun facts about hair for many, considering the stereotypical view that red hair is a Celtic trait (Scottish and Irish). According to Wikipedia, 2 to 6 percent of the US population is redheaded. This means there are about 6 to 18 million people with red hair here, compared to Scotland's 650,000. However, Scotland does boast the largest density of redheads, which has been estimated at 13 percent of the population.

2. Blondes Have the Highest Number of Hair Strands

Another interesting hair trivia tidbit is that research has shown redheaded people require, on average, up to twenty percent greater amounts of anesthetic than the people with other hair colors.. What's more, studies suggest that redheads are also more sensitive to thermal pain, but, on the bright side, they can handle pain from multiple sources more easily than other hair colors.

4. Guess What Hair Color Thor Had

It must've been blond, right? He was a Norse god, after all. Wrong! Here's a piece of hair trivia that will surprise you: in Norse mythology, Thor, the god of thunder, is depicted as being redheaded.

5. Redheads Have a Higher Risk of Developing Skin Cancer

It seems there are quite a lot of facts about hair that involve redheads, doesn't it? This one is not much fun, unfortunately. Because their skin is fairer, redheaded people are more prone to sunburn, which increases the risk of skin cancer. What's more, their skin is also less protected against ultraviolet rays than darker colors, and you know UV rays can lead to cancer. Redheads – slather on that sun cream!

6. Wigs Were in Trend Way before the 17th Century

We're all familiar with the elaborate wigs they used to wear in the 17th and 18th centuries but, if you dig a bit deeper into the history of hair, you'll be surprised to find out that "fake hair" was a huge trend even 5,000 years ago. In antiquity, the Egyptians used to shave their heads to make sure all sorts of bugs didn't start building homes in their hair. They made wigs out of human hair taken from deceased people or slaves. Kings would also wear fake beards and, weirdly enough, so would the queens!

7. In the Middle Ages, Barbers Used to Cut a Lot More than Just Hair

Well, this is surely one of the facts about hair that surprised me the most. It seems that, in the Middle Ages, barbers worked also as dentists and even as surgeons! They used to perform leeching and blood letting and, when you needed to get a tooth extracted, the barber was the person to go to.

8. The Wedge Hairstyle Was Invented by a Figure-Skater's Hairdresser

In 1974, Dorothy Hamill, an Olympic figure skating champion from the USA, asked her hairdresser to come up with a style that would allow her to skate more comfortably, as hair strands often got into her eyes when performing. And so the wedge style came to be, and women everywhere copied it - for good reason. It was neat, clean and easy to maintain, and thus incredibly practical, especially for women in the sports world.

9. You Can't Imagine What Aristotle's Hair Products Smelled like!

Pee. Goat pee, more precisely! Trying to cure his baldness, Aristotle used to rub this special "balm" on his scalp. And his formula was nothing compared to that of Hippocrates who used a mix of olive oil, wine, horseradish and… pigeon poop! He must have been a real hit with the ladies!

Forensics can use your hair for drug tests and detect the presence of any illegal drug metabolites. A single hair strand can tell a lot about your habits in an investigation. One more good reason (among many) to never do drugs, gals!

11. Even when Healthy, You Lose a Lot of Hair Every Day

One of the facts about hair you might not be so happy to learn about is that, even if you are healthy, you shed around 40-150 strands of hair every day. Luckily, this is nothing compared to the huge number of strands you have. Plus, did you know that, on average, you produce about 80 ft. of hair per day?

12. Balding is Way More Common than You Would Think

40 percent of women develop female pattern baldness by the time they reach menopause, and half of the male population develops male pattern hair loss before reaching the age of 50. Fortunately, the fact that we are balding becomes visible only when we lose about 50% of our hair, so I guess we've got that going for us.

13. You Don't Inherit Baldness from Your Mother

There's this myth many believe stating that the "baldness gene" is inherited from the mother's side. Not true. While genetics can play a role in hair loss, those mischievous genes responsible for it can come from both sides of your family. The more family members with hair loss problems you have, the higher your chance of developing such issues yourself.

14. You Are Born with All the Hair Follicles You Will Ever Have

One of the things to know about hair that can be of great use to you – or your wallet, actually – is that you are predetermined with the maximum number of hair follicles you will ever have before you are born. No matter what remedies and "miracle pills" you take, you will never be able to increase this number.

The hair that you can actually see (located above the epidermis) is made of only dead cells – it has no nerves, muscles or blood. Imagine how a haircut would feel otherwise! The root, on the other hand, is "alive".

Another one of the facts about hair you should know about is that, since hair is dead, there's nothing that can really repair split ends – besides simply cutting them off. All those hair products that claim to fix split ends only "glue" them together temporarily – until your next shampoo, more precisely.

For centuries, the Dinka tribe of Sudan has used cow urine to lighten their hair and turn it an unusual bronze color. The Christian missionaries tried hard to convince them to give up this practice, but the proud Dinka refused to.

19. In the 18th Century, Powdered Hair Became a Huge Trend Not Just for the Looks

In the 1700s, powdering hair was very popular among the elite in North America and throughout Europe. Besides the fact that it made dying unnecessary and it was a sign of elegance, there was another reason behind this trend. One of the fun facts about hair hygiene back then you might not know about is that it was almost nonexistent. They rarely washed their head (or much else for that matter), and powdering made it look cleaner, as the powder absorbed the oils produced by the hair.

How many of these pieces of hair trivia did you already know?